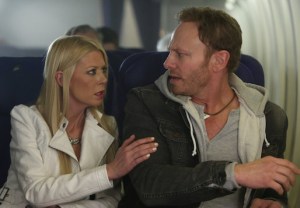 Ian Ziering and Tara Reid aren’t done fighting off evil sharks just yet: The actors are both confirmed to star in this summer’s Sharknado 3, Syfy announced Thursday.

Ziering will once again play surfer-turned-shark-hunter Fin, while Reid will reprise her role as April, his (buzzsaw-accessorized?) ex-wife.

As previously reported, the third Sharknado disaster will take place on “the Feast Coast,” with twisters swirling from Washington, D.C. to Orlando, Fla.

Last July, Sharknado 2: The Second One sucked 3.9 million total viewers into its vortex — making it Syfy’s most watched original movie ever.

Sharknado 3 will make waves this July.

Will you take a bite out of Sharknado 3 this summer? Hit the comments with your thoughts on the casting news!