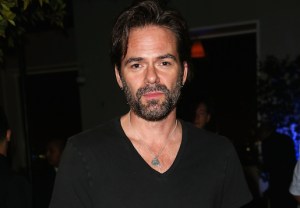 Billy Burke (Revolution) and Kristen Connolly (House of Cards) will be series regulars in the thriller based on James Patterson’s novel, TVLine has learned.

Burke will play Mitch, a straightforward large-animal veterinarian who would rather hang out with animals than deal with humans and all of their complexities.

Connolly’s Jamie is described as “a passionate young journalist” who’s determined to get to the bottom of the strange animal behavior she’s tracking.

The forthcoming series follows young renegade biologist Jackson Oz (played by James Wolk, The Crazy Ones) trying to uncover the secret behind a wave of violent animal attacks against humans.

Burke’s other credits include Rizzoli & Isles and Major Crimes (where this week he reprised his Closer role of Phillip Stroh), 24 and the Twilight films.

Connolly has appeared on As the World Turns, The Good Wife and Nurse Jackie, among others. She’ll next be seen in ABC’s midseason drama The Whispers.

Zoo is slated to premiere this summer.