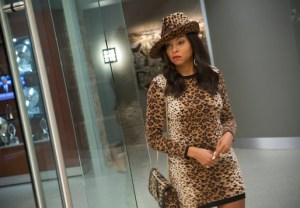 The hits just keep on coming… and not just for the A-list artists of Lucious Lyon’s Empire Entertainment label.

Specifically, I’m talking about his delicious, quotable ex-wife — Cookie “pay the Pakistani” Lyon — and the way her fists seem to interrupt her conversations with the frequency and tenacity of a toddler trying to get his mother’s attention in the midst of an important phone call.

“You gonna Ray Rice me?! I’ve faced bigger in prison — with more talent, bitch!” she screams at the label’s biggest rapper, Kid FoFo, when he threatens to slap her for calling him ugly and talentless during Episode 2 of Empire.

Later, she channels her inner Solange Knowles when Lucious’ current squeeze Anika laughs impertinently at her in an elevator. (In the aftermath, Cookie’s “What have I ever done to you for you to treat me like this?” resonates the hardest and longest, though.)

Heaven help the trick who insults Cookie the next time she’s using her Ginsu to chop vegetables in the kitchen. (I’m kidding, of course! Cookie would never be caught doing the maid’s work!)

I know, I know… I’m supposed to be recapping Episode 2, “Outspoken King,” not writing a tone poem titled “In Praise of the Cookster.” So let me get to work, bitch! (Fun fact: Every time Cookie utters the B-word, an angel gets its wings.)

PUTTING HIS MONEY WHERE THE MOUTH ISN’T | Empire enters a P.R. nightmare when a shopping-mall shooter credits Kid Fofo with inspiring his violent acts. Lucious declines to drop the artist from his roster — passionately defending on a cable news show his artists’ right to express their anger via “music and poetry — not a 12-gauge shotgun” — but when dude insults Cookie for the second time in a week, Lucious pulls the plug. Is it realistic that a label on the brink of an IPO would sever ties with one of its biggest acts? Probably not. But the bottom line is there’s been a pot simmering in the Lyon’s kitchen for 17 years — and it’s only a matter of time before Cookie or Lucious or both cranks it up to boil. I mean, girlfriend throws a shoe — a shoe! — at Lucious when he tosses her from a meeting. And no woman is going to risk a lobby-long limp unless she’s feeling some type of way.

TWO CAN PLAY THAT GAME | Trust and believe, though, that Anika isn’t going to let Cookie just roll up to their suburban mansion in a yellow cab, demand a hot breakfast and lay claim to somebody that she used to know. Anika meets her rival for Lucious in nothing but her bra and panties — and drops some of the episode’s best insults. When Cookie tells Lucious he needs to “drop this young bitch,” Anika counterpunches with this gem: “Yeah, he probably will — when I’m your age. Except by then he’ll probably be one hundred and… ten?” Come now, you can’t have an Alexis without a Krystle, can you? 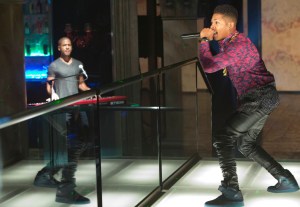 OH BROTHER, WHY DON’T THOU SING BACKUP? | Cookie and Lucious seem determined to pit their respective sons/acts, brothers Jamal and Hakeem, against one another. Lucious plans to launch Hakeem to stardom with a high profile gig (featuring Fofo) at the launch of his newest club; Cookie wants Jamal on the bill, as well. But whaddaya know, when Fofo gets dropped and leaves Hakeem without anyone to sing the hook, Jamal steps in and the duo ignite the whole audience. Not that the guys are on a straight-line trajectory to the top, though. Jamal drops out of a press conference arranged by Cookie to allow him to publicly come out — mainly because Lucious secretly threatens to cut him off from the family fortune if he shares his truth. And Hakeem seems more interested in courting cute labelmate Tianna than he does in writing, recording or rehearsing. Like Cookie says, Lucious can foster talent, but he’s raised an entitled brat as a son.

BURNT COOKIE | The hour ends with Cookie getting dragged into her limo, where an FBI agent who’d previously made a deal with her tells her the terms of her release have changed. Now, she wants our A&R woman to testify in front of a grand jury. “You gonna get me killed,” she sighs, but what choice does she have?

IN OTHER NEWS… | Andre, it turns out, is bipolar, and keeps putting off getting a refill on his prescription — even when his hard-charging wife offers oral compensation for his troubles. Becky does some snooping and learns about Lucious’ ALS diagnosis — so at least he has someone to speak to about his crisis. Cookie hires a ridiculous assistant named Porsha, because… why not? (“Porhsa, get my damn shoe!”) And the cops find Bunky’s body in the Hudson — prompting Lucious to gather the family, cry some convincing tears and claim he’s going to find the real killer. (Insert side-eye here.)

On that note, I pass the mic to you. What did you think of this week’s Empire? Is Cookie the most quotable character on TV? And is Andre about to mess up his chances for inheriting Lucious’ crown? Sound off in the comments!