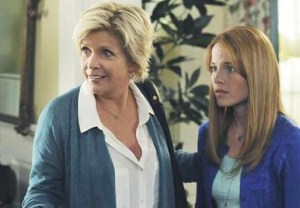 The former Family Ties star will reprise her role as Bonnie (Lea Thompson’s on-screen mother) in a February episode of the drama, and TVLine has learned that Thompson will also be directing the mother-daughter reunion.

Bonnie will return — with BFF Lucille, played by Six Feet Under‘s Joanna Cassidy, in tow — to deliver some “shocking news” to Kathryn.

Thompson excitedly shared this photo herself with Baxter and Cassidy on set:

Any theories about the big news Bonnie has for her daughter? Drop a comment with your thoughts below.