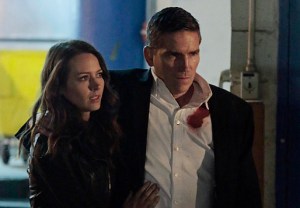 CBS’ Person of Interest wrapped its midseason “trilogy” with an episode that focused on she who is known as Control — including, specifically, whether she has much if any left.

Exhibit No. 1: Control (recurring player Camryn Manheim) knows nothing of Samaritan’s role in the “flash crash,” writing it off as the same “computer glitch” the news reports are citing.

Exhibit No. 2: Unbeknownst to Control, Samaritan’s child avatar is hounding the president’s chief of staff, using facts about the “flash crash” to prove his cred and demand a sit-down with, you know, the leader of the free world.

Exhibit No. 3: Summoned to the ops room, Control looks into a terror threat percolating in Detroit — a quartet of (allegedly) sketchy programmers who (allegedly) plan to bomb a series of historic landmarks. When Control sics Grice and Brooks on the cell, one of them, Yasin Said, escapes termination and flees. Control orders Samaritan to read Yasin’s laptop hard drive, but access is denied, which just never happens with a super-intelligent, omnipotent AI. Speaking on Samaritan’s behalf, Travers (True Detective‘s Michael Potts) tells Control that the laptop is “irrelevant,” that finding Yasin is Job 1.

Exhibit No. 4: Control’s pursuit of Yasin — giving chase via SUV when the lad tries to hitch a train to Canada — is interrupted by the “ski mask-wearing vigilantes” who’ve been on a rampage of sorts in NYC, stealing stock exchange security cam footage and what not. After interrogating/beseeching Control for any intel on Shaw’s whereabouts — Reese and Root, at least, believe she could be alive — it is gleaned that she knows nothing about the shootout beneath the stock exchange, or Samaritan’s human army.

Exhibit No. 5: Upon tracking Yasin to a cabin in Canada, Control is met with a rather convincing version of events, in which the four friends merely were recruited to help with some sort of eco start-up. They each worked on separate pieces of code, and had just made their final delivery — the laptop files Samaritan won’t let Control see — before being targeted as relevants. Control seems slightly affected by Yasin’s explanation… but kills him anyway.

That said, Control obviously is forming questions, as evidenced by her “tour” of the sixth level beneath the stock exchange, where Team Machine’s epic shootout with Samaritan’s army is said to have taken place. Everything appears clean and in order… until she drags a finger along a wall that has freshly been painted over. Hmmm.

Elsewhere as the hour came to a close: Armed with a semblance of a lead from Finch — a Samaritan soldier’s phone traveled in a refrigerated truck from the stock exchange to upstate New York — Reese and Root set out to (hopefully) find Shaw on the other end of that ping. As they drive there, Root is visibly full of emotions and fear for the worst….

What did you think of the episode “Control-alt-delete”?