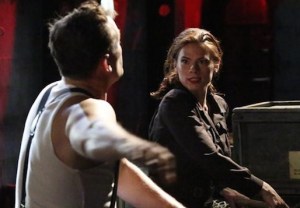 This week on ABC’s Marvel’s Agent Carter, Jarvis landed in the SSR’s crosshairs and a happy discovery wound up having deadly consequences.

In the wake of the massive implosion that happened when the milk truck full of nitramene drove off the cliff, Peggy started researching the mysterious “heart” symbol that Leet Brannis scrawled in the dirt before dying, while the boys at the SSR followed up on Krzeminski’s discovery of a license plate in the refinery wreckage.

Learning that the tag belonged to Howard Stark’s car, Agent Thompson paid a visit to the fugitive inventor’s home, where he was politely stonewalled by Jarvis — all while Peggy hid just around the corner, her own confab with Jarvis having been interrupted. Despite Jarvis’ claim that his employer’s car had been reported stolen, Thompson brought the butler to the SSR for further questioning.

There, Thompson gradually made headway, fibbing about the stolen car report having gone missing, then taunting Jarvis with his years-ago treason charge. Seeing that Jarvis’ calm, cool veneer had been cracked (though not knowing exactly why), Peggy got crafty and cut Thompson’s interrogation off at the knees by “accidentally” producing the lost report. Jarvis then excused himself, while Peggy got chewed out by Chief Dooley.

Peggy and Jarvis later reconvened at Stark’s mansion, where Peggy hoped to find some clues by snooping around the actual breach of the vault. Rappelling down the hole the thieves entered through, Peggy and Jarvis followed a storm pipe, suspecting that the culprits used a high water line on the night of a massive downpour to “float” the stolen “bad babies” away on a raft. During their spelunking, Jarvis fills Peggy in on the treason rap, how he broke some laws in the name of helping his Jewish wife Anna during World War II. Stark got Jarvis out of that pickle, yet Anna remains unaware of the true nature of the gents’ ongoing affiliation.

Peggy’s quest eventually leads to a boat — one that bears the mysterious “heart” symbol — docked across the harbor from where the sewer lets out. Inside, she and Jarvis find the rest of Stark’s stolen toy trove… as well as a brutish guard. Peggy and Jarvis takes turns whaling on the lug, but he gains the upper hand on Jarvis — until Peggy zaps the guy with a “bad baby”/muscle contractor and then conks him with a steel pipe. Peggy is hot to show her SSR bosses and claim credit for the find, but Jarvis reminds her that to do so would only backfire on her professionally, proving his point by walking her through an ersatz interrogation. Instead, Jarvis disguises his voice to phone in a “tip” to the SSR. Sousa and Krzeminski subsequently find the cache of inventions, but as the latter drives the battered guard away — and just as he’s getting an earful about the “English dame” who KO’d him — their car is accosted by a mystery man who fires a kill shot at both men inside.

Elsewhere in Episode 3 (of eight): Angie invited her new neighbor Peggy over to hang one night, but got brushed off (since Carter was en route to do some recon work). We also met Dottie (played by White Collar’s Bridget Regan), another guest at the super-strict Griffith hotel for women. At hour’s end, in the wake of Krzeminski’s tragic death, Peggy showed up at the automat and reached out to Angie, who clocked out early to kick back some schnapps with her gal pal.

What did you think of the episode “Time and Tide”?