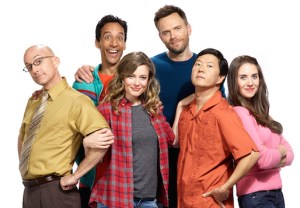 It was announced Tuesday at the Television Critics Association winter press tour that Community will christen its new Yahoo! Screen home on March 17, with two episodes, and then release a new one each Tuesday thereafter.

Addressing the release plan, series creator Dan Harmon said, “There wasn’t any talk” of following an all-at-once binge-watchable schedule. Rather, “I feel in my old school bones that this is the right way to do it. Maybe old school is the best school? It is for rap.” Plus, as star Joel McHale noted, “The episodes are 70 hours apiece.”

Watch this “promo” for Season 6, then read on for more highlights from the show’s TCA panel, which also featured EP Chris McKenna, Gillian Jacobs and Ken Jeong:

* Despite its new, online home, McHale maintained that “the show is still the show — other than Paget being unattractive and Keith’s voice sucks,” referencing new cast members Paget Brewster and Keith David. (Of onetime guest star Brewster’s return to comedy, McHale quipped, “She was hilarious on Criminal Minds!”)

* Since Yvette Nicole Brown won’t be back (opting instead for the shorter hours of CBS’ multi-cam Odd Couple reboot, as she cares for her sick father), Shirley’s absence will be explained in the first episode – but Harmon was mum on details. “There’s a satisfaction to the consumption of it that I don’t want to spoil.”

* Elsewhere on the casting front, the “bad news,” Harmon noted, is that John Oliver is unlikely to show up, nor is Jonathan Banks (now busy with Better Call Saul). As for Donald Glover possibly returning as Troy, he said, “I pray [he] will come down my chimney.”

* Addressing Chevy Chase’s recent claim that he would pop back up as Pierce Hawthorne, Harmon deadpanned, “I think he was talking about Season 4.” Then playing coy, he said that if a dead man were to somehow be resurrected, “You would want to keep that secret. You wouldn’t want to run into [TCA] and say, ‘I’ve created life!'”

* Thus far, Harmon and McKenna have focused on character and story, rather than tackling any new “concept “(e.g. paintball, 8-bit videogame) episodes. “I do retain hope of doing something extravagant, if I can manage the budget… in the last couple episodes.” Harmon said. “But I don’t want to force it.” (That said, Harmon shared that he’s actually working with a slightly larger budget than during the show’s final days at NBC. Thus, “We’re shooting outside for the first time in years.” A new director of photography meanwhile has lent the show “a more cinematic” look versus being a brightly overlit sitcom.)

* With no Nielsen ratings and 0.8-versus-0.7 fluctuations to fret over every morning after, “That corset loosens a little bit” in a way that “there’s a bit more British-ness to the humor,” Harmon said. “It’s a bit freer.” And maybe bawdier? “F—k yeah!” McHale declared. “You’ll see me topless.” In truth, Harmon said that while the new platform makes it “very easy to corrupt the tone of the show, I don’t want to make the mistake of making the show unrecognizable.”

* Harmon is not approaching Season 6 as the show’s swan song. “My sixth-grade mentality about it is this show has lived by the sword of its intimate relationship with the fans, and needs to die by that sword. Only when people stop watching would I ever want to stop making the product.”