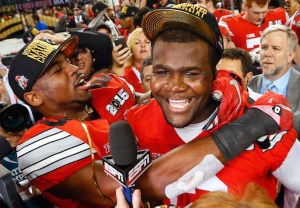 Versus last year’s BCS National Championship, the CFPNC (which really needs a catchier/sexier name at some point e.g “Super College Bowl Extreme”) was up 26 percent.

Opposite football, ABC’s The Bachelor drew 6.4 million total viewers and a 1.7 rating, down 18 and 23 percent from its bloated three-hour premiere (to a demo low). Castle returned to 6.8 mil/1.4, dipping 7 percent in audience but steady in the demo; TVLine readers gave the episode an average grade of “A-.”

CBS’ only original, Mike & Molly (9.2 mil/2.1), was down a tenth yet led broadcast in the demo; a Big Bang rerun drew broadcast’s largest audience (with 10 million viewers).