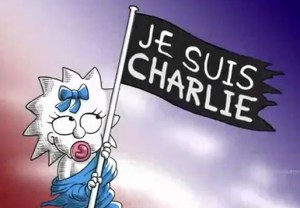 The Simpsons on Sunday joined the chorus of voices paying tribute to the slain staffers of the French publication Charlie Hebdo.

The episode, penned more than two decades ago by Judd Apatow, ended with a shot of baby Maggie holding a flag which reads “Je Suis Charlie” (translation: “I Am Charlie”).

Executive producer Al Jean tells BuzzFeed,”It was the suggestion of James L. Brooks. Our staff can do amazing things on short notice. Other than that my comment would be Maggie speaks for herself.​”

If you’re not aware of the recent tragedy, two Islamist gunmen opened fire at the Parisian satirical newspaper’s headquarters on Jan. 7, killing 12 people. The attack was sparked by Charlie Hebdo‘s recent portrayal of the Prophet Muhammad.