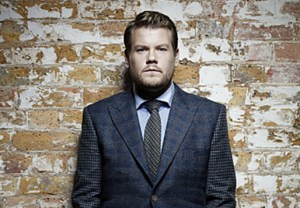 Right now, many Americans may not know who James Corden is.

But, if all goes according to plan, the British actor/comedian’s March takeover as host of The Late Late Show soon will make him a household name.

Corden appeared at the Television Critics Association winter press tour in Pasadena on Monday, and one thing was clear: He wants to be the home audience’s best friend.

“In this climate, we want to make a warm show, a show that never feels spiky,” Corden said of replacing Craig Ferguson. “So much of what you see and read and are polluted by is not pleasant right now. If we can make a show that reaches out to people and reminds them there are still wonderful things, I’d love to make a warm show that’s really funny.”

According to Corden, he and executive producers Ben Winston and Rob Crabbe have been on the job only for four days. Even though an exact format for the talk show hasn’t been nailed down, Corden said the only way to know what works and what doesn’t is to try new things.

“The truth is, there’s no blueprint for our show,” he said. “It’s going to evolve as we do it. We could prep for this show for a year, but it’s only in doing it that we’ll figure out what it is.”

Regarding Corden’s potential opening monologue, Crabbe added: “Straightforward joke-telling is not something that he does a ton of. We’re going to consider other paths. We want to be guest-focused.”

Corden’s credits across the pond are extensive (Doctor Who, Gavin & Stacey), and he won a Tony Award in 2012 for his work in the Broadway play One Man, Two Guvnors. Most recently, he appeared as the Baker in the musical movie Into the Woods.

Now that Corden will be largely focused on one nightly show, he insisted that he’s not putting the brakes on his creativity.

“It’s more like I’m putting my foot on the gas, really,” he said. “In terms of being creatively fulfilled, I don’t know if there is a better thing I could ever do with my time.”

Will you give James Corden’s Late Late Show a shot? Hit the comments with your early thoughts on the talker.