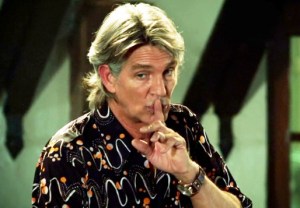 The spirit is moving Eric Roberts back to CSI this spring.

Roberts will reprise the role of Brother Daniel Larson in the CBS procedural’s season finale, which is ominously titled “End Game,” TVLine has learned exclusively. This marks Roberts’ third CSI appearance; he previously guest-starred in the Season 13 finale and Season 14 premiere, both in 2013.

“We’re super excited about Eric Roberts returning to CSI to reprise his role as the silk-shirt smooth preacher-pimp, Brother Larson,” executive producer Don McGill tells TVLine. “Eric is always a blast to work with, and it’s always a privilege to be in his company and watch him do his magic.”

Any guess what might bring Brother Larson back into the CSI fold? Drop a comment with your thoughts below.