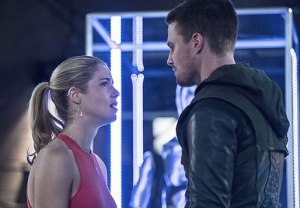 Those are all the ways that Oliver has declared his feelings for Felicity on this season of Arrow. But thus far, his Girl Friday has been pretty mum about where her heart lies when it comes to her partner. Rest assured that will all change when the presumed dead Oliver makes his way back home to Starling City.

“She speaks up!” executive producer Andrew Kreisberg tells TVLine. “She definitely speaks up, but not quite in the way I think people are expecting. She has a lot of strong feelings.” (Could EP Marc Guggenheim’s tweet, teasing his favorite moment from an upcoming episode — “I don’t want to be a woman you love” — be a bad omen?)

The scene in question, which takes place at the end of Episode 12, “probably is my all-time favorite Emily Bett [Rickards] performance,” Guggenheim enthuses. “She is so, so, so, so incredibly strong in that scene, it’s ridiculous.”

For the would-be couple, “this season is really about them saying all the things they’ve never said” after two years of “teasing each other,” Kreisberg adds. “Where that takes them is to some tough places, but also to some right places. The how and the why and the when and the where of that is the fun in the back half of the season.”

Olicity fans, are you excited for Felicity’s big declaration?