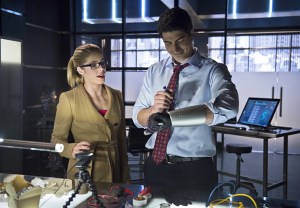 Felicity is giving Ray Palmer a hand — with his hand.

In a fresh batch of Arrow photos from next Wednesday’s episode (The CW, 8/7c), the tech wiz is seen helping her boss with his A.T.O.M. exosuit.

Ray “is on a slightly different track” with his hero crusade “than the other members of Team Arrow,” executive producer Marc Guggenheim said recently during a Television Critics Association panel for the show.

Elsewhere in the sneak peek, Diggle and Roy (in his Arsenal costume) hit the streets to fight crime without Oliver and get a beatdown from guest star Vinnie Jones as villain Danny “Brick” Brickwell.

Flip through the gallery, then hit the comments with your thoughts on Ray’s mission.