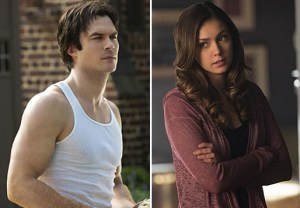 Are The Vampire Diaries‘ Damon and Elena on the road to happily ever after?

The upcoming episodes of the CW series will find the lovebirds “finally working their way back towards each other,” executive producer Julie Plec previewed at a Television Critics Association press tour panel in Pasadena on Sunday. As the couple strives for “a functional relationship,” fans will be treated to the beginning stages of their romance that they missed the first time around.

That pleased star Ian Somerhalder, who noted, “The three or four [or] five months that were skipped over, the honeymoon phase, you don’t typically get to see Damon in a time and space where he’s truly happy.”

“It’s great to see anyone happy at any time,” he continued, adding that Damon and Elena are “extremely deserving” of some happiness. “They’ve been through a lot. Love trumps all. So when you see, you want it to win.”

But everything can’t be peaceful on the show, so the Gemini merger will “culminate with a lot of drama and death,” EP Caroline Dries teased.

While no end date is in sight for The Vampire Diaries, Plec said she and Kevin Williamson crafted their “perfect” ending a while ago. However, since “the show is going to go on longer than we could have dreamt of,” the concept has “evolved.”

“But it’s still rooted in that same idea. We’re still on that same path,” she continued.

As for spinoff The Originals, the back half of the season will explore Esther’s origins as a witch, the deal she had to make and more of the family mythology. And of course, the looming threat of witch Dahlia to Hope’s safety is prevalent.

“The big question is will she show up and come for that child?” EP Michael Narducci teased, adding that Klaus might have a different strategy for protecting his young daughter than Elijah.