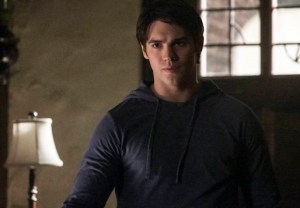 The Vampire Diaries will be down a Gilbert soon

Steven R. McQueen, who plays Jeremy, no longer will be a series regular on the CW series after this season’s 14th episode, TVLine has confirmed.

“It’s time for him to go out and live his life,” executive producer Julie Plec tells EW.com. “He’s growing up and moving on. He will be out living a real life.”

Jeremy’s exit comes as the show is “moving towards the end,” the EP explains. “Over the course of the next few years, we will need to start having the characters make choices about what they want with their lives and [we will] say goodbye to some people. It’s all part of moving toward the end, however long that takes.”

As a result, she added, Jeremy will be leaving town once again and going to “another place” — art school!