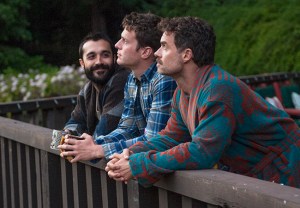 Early on in Looking‘s road trip-themed Season 2 premiere, Patrick makes it clear to pals Dom and Agustin that he wants the forthcoming getaway to be heavy on nature walks, mint tea and monopoly and light on sex, drugs and debauchery. “I really feel like this weekend should be about the three of us hanging out together,” he maintains. “Not us and 200 naked homos crammed in a pool.”

Fewer than 24-hours later, Doris crashes the trio’s G-rated sojourn, promptly declares, “We’re going out!” and, before you know it, Patrick is having sex with Kevin against a thousand-year-old redwood.

But let’s back up and quickly recap the major-ish moments from the HBO dramedy’s opener:

PATRICK | Coming off of his tryst with partnered boss Kevin and subsequent breakup with Richie, Patrick tries mightily to keep his mind off the triangle drama waiting for him at home. His straight-and-narrow mission gets derailed when he decides it’d be a good idea to try Ecstasy for the first time right before attending a dance party in the woods. Just as the drug starts to kick in, he encounters a Richie lookalike, and the two start going at it like squirrels in heat. Spooked, Patrick flees the bash, phones Kevin and summons him to the forest for a quickie against the aforementioned tree. (The glow stick was a nice touch, eh?) The next morning, he comes clean to Dom and Agustin about Kevin and acknowledges the affair is wrong but confesses he can’t put a stop to it.

DOM | The fact that it’s Lynn’s vacation home they’re holed up in proves convenient for Dom, who uses the opportunity to snoop around for clues about his new, older beau. Here’s what he digs up: Lynn has a huge ego (see: the massive painting of himself he has hanging in the living room), and he may not be over his ex (see: tons of photos of Lynn and Brian looking very happy and in love). Later, Dom meets a hottie at the woodsy Promised Land bash and promptly takes his open relationship with Lynn for a test ride. (Side note: Anyone else getting a strong Patrick-Dom vibe in this ep?)

AGUSTIN | The show’s most grating character makes an unlikely new friend named Eddie — AKA “a big Bear who cares about trans people and has [HIV]” — and immediately becomes significantly more tolerable. There’s no sex, but there’s flirting and naked skinny dipping and the two are kind of adorable together.

DORIS | Just as uncensored, uninhibited and fabulous as ever.