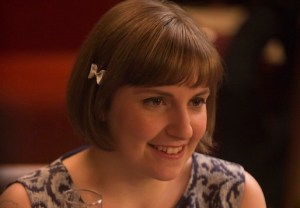 Hannah Horvath kicks off Season 4 of Girls with a surprising display of maturity and selflessness — offering a toast to her parents for “the massive amount of love and support you have shown me in the four years since I graduated from college.”

Fret not, though, just a few seconds later, the poster girl for infuriatingly entitled twentysomethings drops the proverbial, gnarly housefly into the champagne. “And I just wanna say that even in moments when, superficially, it didn’t seem like you were supporting me — and it seemed like you were criticizing my choices and doubting my talent — I know that you were supporting me in your own way,” she adds, “So, that means a lot.”

Like her mom and dad, all we can do is wince, knowing that while Hannah is taking a major step toward actual adulthood — their dinner takes place on the eve of her move to attend the prestigious Iowa Writers’ Workshop — there’ll be no Pinocchio-esque Blue Fairy to wave a wand and make the transition a magical one.

The episode is a pretty sleepy installment that sets up possibilities for each of the show’s central characters rather than advancing their stories, so let’s recap the (limited) action for each chica and talk about what it might mean over the course of the season.

HANNAH | Aside from bickering with a sullen Jessa (who resents Hannah for convincing her to stay in New York, then abandoning her for grad school), the real tension of Hannah’s last 48 hours in New York is the largely unspoken fear of what her move will mean to her relationship with Adam. He’s sullen and silent as ever — mortified by his work in an ad for a prescription antidepressant and worried (as is Shosh) about the shape of his forehead in relation to Zachary Quinto and Armie Hammer. More troubling though, Hannah and he both know he’s crap on the phone — and he keeps refusing to nail down any kind of concrete plan for visitation/communication. Their final sexual encounter seems more compulsory than passionate, and then he feigns sleep as she exits their apartment, and she doesn’t really try so hard to wake him up. Is Jessa right that Hannah is “p—-ing out,” that she doesn’t even have the bravery to break off a doomed relationship? I’ve got no investment in the Hannah-Adam bond, to be honest — his grunting-guy “honesty” has always felt like a ridiculous front, and she’s at least a decade of maturation away from being remotely ready for a lifelong commitment — but that doesn’t mean it won’t be interesting to see her navigate long-distance monogamy in a new environment in which she has no anchors.

MARNIE | Our first glimpse of Marnie this season — serving up a “meal” of sorts for Desi while bent over a kitchen counter — should pretty much obliterate any remaining images of Allison Williams as Peter Pan. “Oh I love that,” he groans, and Marnie’s response — “I love you too” — shows us she’s still living deep inside her own fantasy world. That veneer gets shattered briefly when Clementine shows up at a “Desi & Marnie” jazz-brunch performance and apologizes for accusing Marnie of trying to take her man — leaving Marnie almost nauseous with guilt. The concern for another human being quickly passes, though, and when one too many restaurant patrons interrupts her farewell ditty to Hannah, she flees the scene in tears, devastated that nobody’s paying attention to her. Elijah reminds her the music biz is “not for sissy bitches” but rather is the playing ground of “bad bitches who don’t care,” but I suspect the only thing she’ll retain is a catty comment from a female friend of Elijah’s nasty ex that she’d make a great courtroom extra on The Good Wife, or better yet a wordless victim on Law & Order: SVU. Sigh. I’d love to see Marnie using her intelligence/degree and attempt to forge herself a non-musical career path this season, but alas, it looks like the most we can hope for is an extraction from Desi’s spell — and maybe a shred of self-respect?

JESSA | Jessa gets booted from Beadie’s employ by the woman’s indignant daughter (a hilarious Natasha Lyonne), who rails against her (and threatens to call the cops) for almost pulling off Beadie’s assisted suicide. “Every time I meet someone five or more years younger than me, they are a complete asshole! Is it because you were told you were special one too many times and you believed it? Because when my generation and every generation before me were called special, we were smart enough to know it meant that we were stupid, so it made us work that much harder to stop being stupid!” she roars. (I love when people yell at Jessa — is that terrible?) Jessa scores a cheap last laugh by getting Beadie to not-so-quietly say she loves her more than she does her daughter, but so what? Chances are Jessa won’t ever see the woman again, and it’s yet another relationship of hers that’s as fleeting as the crumbs at the bottom of a box of Ritz.

SHOSH | Shosh finally gets her diploma — though her divorced parents (Anthony Edwards and Ana Gasteyer, amusing but underutilized) prove so cantankerous that she winds up fleeing the registrar’s office in horror. At Hannah’s farewell lunch/Marnie’s performance, she bumps into Ray — and apologizes for her tearful theater outburst/attempt to manipulate him into getting back together with her. In the search for signs of mature behavior in our quartet of protagonists, this one ranks No. 1 for the Season 4 premiere — just ahead of Hannah actually packing her possessions and taking them to the shipping center.

On that note, I pass the mic to you. What did you think of the Girls‘ Season 4 premiere? Grade the episode in our poll, then hit the comments to expand on your thoughts!