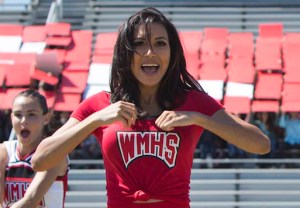 Fox’s Glee opened its final season/christened its new Friday home with 2.3 million total viewers and a 0.7 demo rating, down sharply and expectedly from its previous premiere (which did 5.1 mil/2.0 on a Thursday) but up 21 percent and a tenth from its May finale (which aired on a Tuesday).

TVLine readers have the two-hour opener an average grade of “B.”