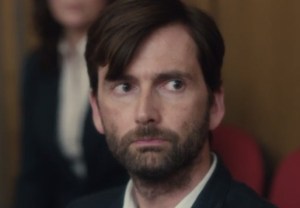 In a courtroom, the words “not guilty” can be cause for immense relief.

Unfortunately, for those grieving in Broadchurch‘s second season, that is not the case.

BBC America has released a clip from Season 2 of the acclaimed crime drama, in which Joe Miller — accused of murdering young Danny Lattimer — pleads his innocence in front of Danny’s family and Detective Alec Hardy (David Tennant).

To say the scene is tense would be putting it very lightly.

Press PLAY on the video below for a sneak peek at the new season, then hit the comments with your early thoughts.