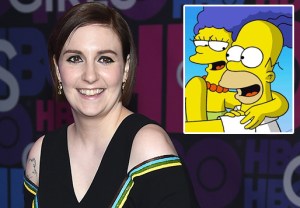 Is Lena Dunham poised to break up one of the most beloved marriages on television?

(Fun fact: Like Dunham, Candace will also be inked.)

Sneak peek Photo of me as “US Ambassador Nancy Kelly” on @NCISLA_CBS airing 1/19! Who’ll be watching?! #NCISLA pic.twitter.com/zjL83op6a1

* Alison Sweeney (Days of Our Lives, The Biggest Loser) will star in a series of Chocolate Chip Cookie Murder movies for Hallmark Channel, based on the book series by Joanne Fluke. The first movie is set to premiere this spring.

* Syfy has tapped The Hunger Games‘ Josh Hutcherson to guest-judge Episode 3 of SyFy’s FaceOff, per EW.