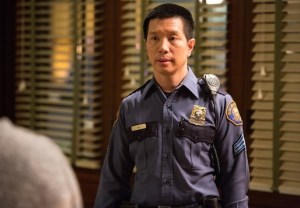 The revelation that began in the NBC series’ midseason finale continues next Friday (NBC, 9/8c), as the sarcastic sergeant finally learns what’s been going on in Portland all this time: There are monsters, and his friends fight them.

Elsewhere in the episode, the Wesenrein act on their threats against Monrosalee’s marriage, and Juliette tries to figure out whether her Hexenbiestiness will stick.

But back to Wu: In the exclusive clip below, Nick and Hank take their very suspicious co-worker to Nick’s trailer, where his Wesen education begins in earnest. Press PLAY to watch Wu’s mind get blown.