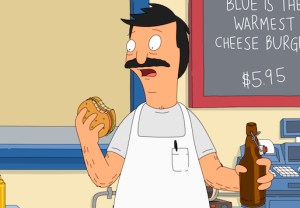 Linda’s a little too excited about the prospect of turning the family restaurant into an illegal speakeasy in this Sunday’s Bob’s Burgers (Fox, 9:30/8:30c), but from the way everyone’s reacting to Teddy’s home-brewed beer, we can’t say we blame her.

In the recently renewed series‘ exclusive clip below, Teddy debuts his special ale (New England Patriots fans will get a kick out of the name) at the Belchers’ establishment, with some hipster-ish homebrew pals in tow.

Killjoy Bob wants nothing to do with the bucket-fermented suds… until, that is, he pairs a sip with a bite of one of his burgers.