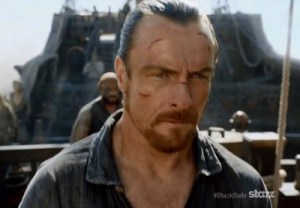 Everyone is a monster to someone in the Season 2 trailer for Starz’ pirate drama Black Sails.

The sneak peek features more than one scene of “brutality” and several burials on the high seas, as well as plenty of shots of the show’s Cape Town shooting locale.

The new season, premiering Jan. 24 at 9/8c, will “expand out geographically,” star Hannah New revealed during a panel for the show at the Television Critics Association press tour in Pasadena on Friday.

Meanwhile, flashbacks to 15 years earlier will start “unpeeling” the character of Captain Flint and “how he became the pirate that he now is,” his portrayer Toby Stephens previewed. “We get to know a lot more about him and what is driving him to do these quite extreme things. He’s perhaps a lot more complicated than you think at the end of [Season] 1.”

Press PLAY to watch the trailer — which is set to Nick Cave’s cover of Leonard Cohen’s “Avalanche” — then hit the comments with your thoughts on the action.