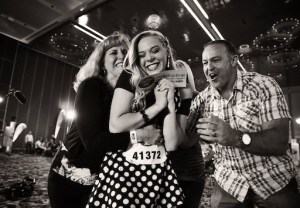 Pay no attention to Jennifer Lopez’s birth certificate! The “dewdrops in the enchanted forest” freshness of her visage is all the confirmation you need that the woman who gave us “Booty” (and booty) last summer is most definitely still a teenager.

Pity the poor mortals who have to age, though. “There’s something about when they’re that young,” J.Lo mused after 16-year-old Lovey James’ perky rendition of “Break Free” (a surprising hit for decaying 21-year-old Ariana Grande). “There’s a fearlessness… the same girl at 25 that comes in here and [hasn’t] had the success is a little beaten down. That freshness is so exciting!”

Just spitballing here, Judge Lopez, but maybe the women who’ve waited ’til their twenties to audition for American Idol have been going to college or honing their songwriting skills or working to pay for their kids’ grocery bills or making damn sure they’re mentally, spiritually and intellectually solid before subjecting themselves to the emotional meatgrinder that is reality television.

OK, you didn’t come here to read a feminist rant — and I honestly didn’t set out to write one. And even worse, I’ve buried the big news: After a solid but not-in-any-way-spectacular Season 14 premiere on Wednesday, tonight’s installment gave us four or five legitimate contenders to the throne currently occupied by that retro-rock dude that won Season 13 and whose name I can almost guarantee won’t be uttered inside The House That Fantasia Barrino Shook to Its Foundation between now and 2017.

Without further ado, let’s talk about the 21 — yes, 21! — latest hopefuls who are bound for Hollywood Week — in order from least- to most-promising, and in the pithiest way possible! (It’s too early to get too invested, yes?) And be sure to check out the photo gallery of several key contenders at the bottom of this recap (as well as the return of Reality Check — costarring Melinda Doolittle — returning Monday on YouTube).

21. Zach Kaltenbach, “Grenade” | To quote Harry Connick Jr., “What? Really?” In this instance, the dissenting opinion was the correct one.

19. Steffi Ledbetter, “Back to Black” | Montaged chica still managed to fit 12 too many riffs into her 14-second Amy Winehouse snippet.

18. Jhameel, “Buy U a Drink” | In the wake of a very strong episode, his origami presents to the judges and his asymmetrical face paint are all I remember. Which is not the ringingest endorsement of his vocals.

17. Alison Peratikos, “Cowboy Take Me Away” | Her Dixie Chicks cover was like when you order a burger and substitute the Caesar salad for fries, and the salad is fine but chances are you won’t be recalling any details about it in 48 hours.

16. Loren Scott, “Treasure”/”Saving All My Love For You” | A cynical major-label A&R type would sign this incredible beauty on looks alone, but lack of artistic authenticity — and the occasionally grating quality of her glory notes — isn’t gonna fly in the talent-first confines of the Idoloonie Nation.

15. Naomi Tatsuoka, “Someone Like You” | Like J.Lo said, there were some gorgeous moments in this eccentric gal’s performance. But Naomi’s self-described “Tequila Tuesday” stylings were more appropriate for a karaoke-bar hostess than a viable recording artist.

14. Jake Black, “Lego House” | Need more information to see if this montaged guy with a penchant for beat-boxing is capable of being anything more than Hollywood Week fodder.

13. Alex Shuer, “I See Fire” | Candidate for Season 14 Heartthrob showcased a lovely tone on his Ed Sheeran cover, but he’ll have to do a better job of hiding his obvious nerves if he’s going to survive into the live shows.

12. Piper Jones, “Mama Knows Best” | Served up Jessie J’s big hit with an extra side of sauce, but there were some minor imperfections peppered in throughout, too. I’m on the fence.

11. Trevor Douglas, “Sing” | Science geek teen got an inordinate amount of airtime for someone without a Certified Tragic Backstory. He certainly mastered the rapid-fire tempo of his Ed Sheeran cover, but he’s the type of contestant who might’ve benefitted from a few more years of experience to shake out the raggedy edges of his not-quite-full-enough tone.

10. Gina Venier, “Put the Gun Down” | I know, I know… this drum-playing rocker chick spoke her lyrics as much as she sang ’em, but wouldn’t the early live shows of Season 14 be more interesting with a one-woman band?

9. Hector Montenegro, “Too Close” | Hard to root against this handsome and charismatic cosmetologist, but while his pitch was rock solid, I’m not sure his sound is unique enough for Top 24 status.

8. Lovey James, “Break Free” | You know incoming mentor (and label exec) Scott Borchetta will hear the ka-ching of a cash register the second he lays eyes on Lovey, but while she hit damn near every note of her Ariana Grande cover, there was something slightly affected about the way she pronounced her words that stopped me from fully connecting with her performance. She’s still got time to visit the Fantasia School of Vocal Enhancement to take a course in Ugly It Up 101, though.

7. Garrett Miles, “Proud Mary”/”Como La Flor” | Quietly confident blind guy reinvented the melody and tempo of CCR’s “Proud Mary” in a way that made it more laid-back and countrified — without losing its hardscrabble essence. His ability to break out a Selena soundtrack cut was the Fritos atop the Gordita.

6. Kelley Kime, “Sunday Morning” | Lucky for the judges, Kelley’s slinky, sultry, smoky Maroon 5 cover made her a no-brainer for a ticket to Hollywood. I mean, no matter how cute her toddler’s “Let It Go” was — BTW, way to jump on a trend 10 months too late, Idol — she should’ve gotten a gold star, not a Golden Ticket from Harry, Keith and Jennifer.

5. Cody Fry, “Over the Rainbow” | He’s got craaaaaaayzeeee range — and a very intriguing way of phrasing a song. Still, Cody will need to rely a little more on heart, and a little less on stylistic frills, before he’ll kick me into speed-dial mode.

4. Clark Beckham, “It’s a Man’s Man’s Man’s World” | I don’t know where Keith’s mind was during Clark’s acoustic James Brown cover, but no way did it lack oomph or emotion. I loved that “step-down” run he threw into the final “this is a man’s…” — and the way he brought to life the pain and intensity of the lyrics without veering into vocal histrionics. Dude is one to watch.

3. Jess Lamb, “Ain’t No Sunshine” | Bravo to Idol‘s producers — or at least the episode’s wiley editor — for bringing in 28-year-old Jess, a veteran performer with all the buoyancy and enthusiasm in the world, immediately after J.Lo’s “teenage freshness” comment. This gloriously genuine soul singer’s spine-tingling trills and ad-libs made me feel like I was hearing Bill Withers’ chestnut for the very first time — which is about the highest praise you can heap on a complete unknown’s audition. Please please please let her advance to the live shows as a tonic to the inevitable youth invasion.

1. (tie) Savion Wright, “Change the World” | One of Season 13’s most painful Green Mile cuts expressed his thankfulness for the extra year of experience, and I can’t argue with his thinking. Unique and soulful as Savion was a year ago, his Eric Clapton cover — a masterclass in finesse and subtlety, with the occasional sprinkle of Stevie Wonder-esque showboating —  was, in a word, exquisite. Also, with his braces off, Savion’s hotness factor has quadrupled. (Call me shallow for making the observation, but we all know that stuff counts when teenage girls/gays/middle-aged moms get to voting.)

1. (tie) Sarina Joi-Crowe, “Love Runs Out” | You know how when Oprah used to do her Favorite Things episode, and the unsuspecting audience was left screaming/crying/imploding over the bounty of swag bestowed on ’em. That’s how I felt seeing Sarina — whose brief snippets of airtime in three prior seasons made her unexplained pre-voting eliminations all the more infuriating — finally get her moment and STRAIGHT-UP SLAYYYYY IT. As Harry noted, Sarina’s laser-sharp runs were completely in time with the wicked tempo of One Republic’s very best number — and the final “yes, I can do this without Auto-Tune or a 10-second pause-for-breath run” was the kind of awesome spectacle necessary for any future Idol champ. If you didn’t know Sarina-Joi Crowe before today, now you know.

On that note, I pass the mic to you! What did you think of night two of the American Idol Season 14 premiere? Vote for your favorite auditions, then hit the comments with your thoughts. Oh, and please come back to TVLine all season long for wall-to-wall Idol coverage — plus a brand-new season of our Web series Reality Check starring yours truly and the incomparable Melinda Doolittle!