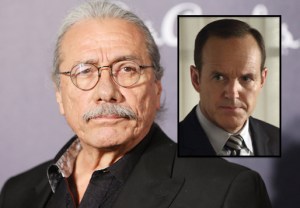 As first reported by Marvel.com, the Battlestar Galactica admiral is boarding ABC’s Marvel’s Agents of S.H.I.E.L.D. in the role of Robert Gonzales, a mysterious character whose arrival promises to have “massive repercussions for Director Coulson and his team.”

In addition to his four-season stint aboard the Galactica, Olmos’ TV credits include Dexter, The West Wing, American Family and Miami Vice.

Agents of S.H.I.E.L.D. resumes its sophomore season on March 3; Olmos will debut sometime that month.