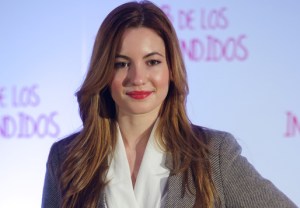 Based on the book series by Terry Brooks, Shannara takes place in a post-apocalyptic world known as the Four Lands. Baquero, who starred in Pan’s Labyrinth, will play Eretria, a lovely young thief who finds herself tagging along on a journey to save that world.

Shannara also stars Austin Butler (The Carrie Diaries) as Wil Ohmsford, a half-elf/half-human who discovers he’s the last member of the Shannara family; Poppy Drayton (Downton Abbey) as Amberle, an elf princess who becomes a member of the Chosen, a group dedicated to protecting the mighty Ellcrys tree; Aaron Jakubenko (Spartacus: War of the Damned) as Ander, Amberle’s uncle who helps her train to become a Chosen; and Manu Bennett (Arrow) as Allanon, a wise druid who sends Wil on a sizable journey.

Not exactly your typical MTV show…

So, will Shannara make the journey to your DVR? Drop a comment with your thoughts on the series below.