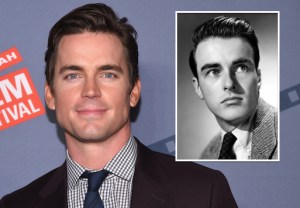 The long-gestating project, which started off as an indie film feature much like The Normal Heart, tells the story of legendary actor Montgomery Clift as he finds himself deeply involved with a young Elizabeth Taylor following the filming of A Place In the Sun.

Clift was one of Hollywood’s biggest male stars and was nominated for an Oscar four times. He became addicted to alcohol and drugs after a car accident left his face partially paralyzed. He also struggled with his sexual orientation.

Last month, during a conference call to promote White Collar‘s series finale, Bomer — who earned Emmy Award and Golden Globe Award nominations for his role in The Normal Heart — expressed his desire to “make the Montgomery Clift biopic happen.”