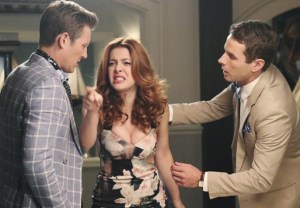 It’s been a busy week for Revenge‘s Elena Satine. First, she was promoted to series regular — and now, Louise is getting a brother!

New photos from Sunday’s episode showcase the arrival of Sebastian Pigott (Ascension, Being Erica) as Lyman, the golden child of the Ellis family. Though, honestly, how could you not be the golden child when Louise is your sister?

(Side note: Not to be presumptuous, but given their similar attire, could Louise’s brother possibly be a match for Nolan? As if their friendship could get any weirder…)

But because dinner parties aren’t allowed to run smoothly on Revenge — like, ever — a surprise guest arrives, sending Louise into a tizzy.

Browse photos from the new episode below, then drop a comment: Do you see sparks between Lyman and Nolan, too?