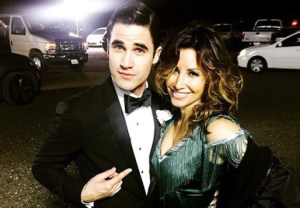 Pam Anderson is coming to Glee this season — but there’s a catch!

It turns out “Pam Anderson” is actually the name of Blaine’s mother, played by House of Versace star Gina Gershon, TVLine has confirmed. Spoiler-y set photos — including the above shot of Gershon with Darren Criss — have been floating around the internet for a bit.

Based on Gershon’s Instagram feed, it looks like she’ll converge with Estefan at a wedding — but whose? Brittany and Santana’s? Kurt and Blaine’s? Both? (TVLine did, after all, reveal there will be two weddings in Season 6.)

Your thoughts on Glee‘s latest parental reveal? Browse new behind-the-scenes Season 6 photos below, then drop a comment with your hopes/fears for Glee‘s farewell season.