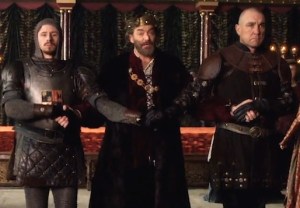 ABC cued up Galavant, its musical-comedy “extravaganza” on Sunday night. Did the first two episodes of the midseason series leave you whistling a happy tune?

Exec-produced by Dan Fogelman (The Neighbors) and with music from Alan Menken and Glenn Slater (Tangled), Galavant stars Joshua Sasse (Rogue) in the title role, as a knight whose armor loses its lustre after his lady love, Madelena (Mallory Jansen), gets kidnapped by — and then agrees to wed — the wealthy King Richard (Psych‘s Timothy Omundson).

Galavant is roused from his defeatist doldrums by his squire Sid (Luke Youngblood), who introduces him to Isabella, a princess who offers her kingdom of Valencia’s priceless gem in trade for Galavant besting King Richard. (What Isabella is hiding is that her parents were not, as she claims, murdered by Richard, and that she in fact is working on behalf of the king to lure Madelena’s true love into a trap.)

Low on funds early into their quest, Galavant, Isabella and Sid stop by a jousting tournament, where Gal goes through a Rocky-like training montage in preparation to face Sir Jean Hamm (guest star John Stamos) in the finals. For good measure, Isabella plies Jean with absinthe the night before, but Galavant shows up for the tourney all cramped up from training, and what results is the lamest joust ever, leaving patrons restless, Sir Jean puking into (and out of) his helmet, and Galavant winning by a Rocky II-like hair.

Meanwhile at the castle, King Richard asks his henchman Gareth (Vinnie Jones) to help him “butch up” and thus perhaps finally get his bride into bed. Richard makes some progress with his slightly gruffer new ‘tude, to the point that he and Madelena — who’s semi-discreetly been getting jolly with the jester — join in the ballad “Maybe You’re Not the Worst Thing Ever” (embedded below).

Next week: A visit to Sid’s (Jewish) hometown reveals that he’s been lying to his folks about his career, while King Richard throws a (rather dreary) ball for his Valencian prisoners. Also, Galavant & Co. come across a band of land-locked pirates led by Downton Abbey‘s Hugh Bonneville.