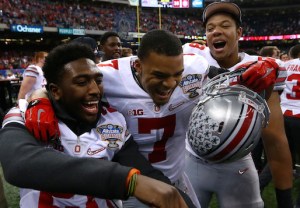 At 5 pm, the match-up between Oregon and Florida State — despite being the most lopsided Rose Bowl contest since 1948, with a final score of 59-20 — drew 28.16 million total viewers, up 51 percent from last year.

As noted by our sister site Deadline, ESPN is paying a reported $470 million annually in a 12-year deal to host the semifinal games of the College Football Playoffs, of which this is the inaugural year.