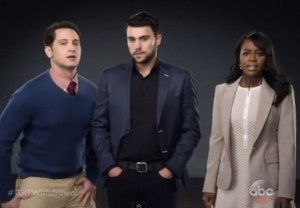 In the prescription drug-style “commercial,” cast members from Grey’s Anatomy, Scandal and How to Get Away With Murder illustrate the signs that you just might be suffering from TGITWD — which is triggered by an “OMG deficiency in the brain” — during this holiday hiatus, then assures you that the Shondalanda trifecta will return, at month’s end.

Which #TGIT drama are you most anxiously awaiting the return of?

UPDATE: An extended version has since been released: