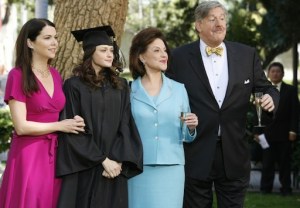 Graham, who played Herrmann’s daughter Lorelai on the beloved dramedy, shared the following statement with TVLine:

Ed Herrmann’s combination of pure charisma plus his distinctive voice lit up any room he entered. He had a gentlemanly manner, a wicked sense of humor, and a sharp wit. He was well-read, interesting, and just plain fun to be around. He had deep respect and love for the craft of acting and led by example. You wanted to be better prepared, or just plain better, because he always was. He brought such humor and humanity to all his work, but I know the character of Richard Gilmore had a special place in his heart. He loved our show and was touched by the enthusiasm of its fans.