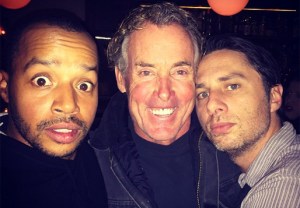 The doctors are (back) in!

Zach Braff reunited with former Scrubs co-stars Donald Faison and John C. McGinley over the weekend — and luckily for us, he snapped a selfie to immortalize the moment.

“Reunited and it feels so good,” Braff captioned the photo of the Turk-Dr. Cox-J.D. sandwich. Needless to say, fans lost their minds.

* Game of Thrones has topped TorrentFreak‘s annual list of the most-pirated television shows for the third year in a row. Runners-up include The Walking Dead, The Big Bang Theory and How I Met Your Mother.

* NBC on Monday premiered Today: The Musical, a 14-minute production written by Kathie Lee Gifford. There’s singing, there’s dancing, there’s… a pants-less Matt Lauer. Really, you just have to see it to believe it: