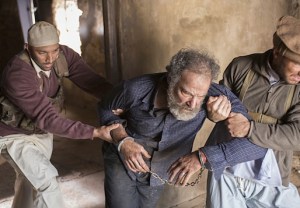 It seems not everyone was enamored with Homeland‘s creative resurgence in Season 4.

Pakistani officials who binge-watched all 12 episodes of the Showtime hit’s recently concluded run of episodes were outraged by the way their country was portrayed, according to the New York Post.

Season 4, which was filmed in Cape Town, South Africa, focused on Claire Danes’ Carrie Mathison as she worked to uncover a terror plot against the U.S. embassy in Islamabad that was supported by some members of the Pakistani government and its Inter-Services Intelligence agency.

“Maligning a country that has been a close partner and ally of the US… is a disservice not only to the security interests of the US but also to the people of the US,” Pakistan Embassy spokesman Nadeem Hotiana told the paper.

Another source lamented to the Post that “Islamabad is a quiet, picturesque city with beautiful mountains and lush greenery. In Homeland, it’s portrayed as a grimy hellhole and war zone where shootouts and bombs go off with dead bodies scattered around. Nothing is further from the truth.”

The Post added that government officials took their grievances to Homeland‘s producers, but to no avail.