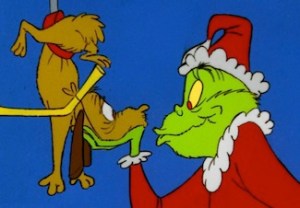 ABC’s broadcast of the animated classic How the Grinch Stole Christmas topped Thursday night with a 1.9 demo rating (surging 58 percent from a year ago), while drawing 5.9 million total viewers (up 44 percent).

Those tallies mark five- and four-year highs for the ‘toon.

Leading out of that, the live-action, Jim Carrey-fronted Dr. Seuss’ How the Grinch Stole Christmas did 5 mil and a 1.8.

Ratings for the Stateside broadcast of the Doctor Who Christmas special will trickle in later, possibly reported under separate cover.