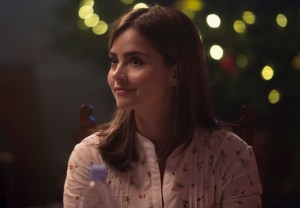 Fans of Doctor Who‘s current Companion received a Christmas Present just under the wire, when at the conclusion of Thursday’s holiday special Jenna Coleman confirmed she’s continuing on as Clara.

“It’s wonderful,” Coleman said at the close of Doctor Who: Last Christmas, putting to rest recent rumors of her possible exit. “I get a whole other series of stories with the Doctor, and I couldn’t walk away with the story being unresolved…. I think [Clara and the Doctor] finally just reached a point where they really understand each other.”

Peter Capaldi coming on as the Twelfth Doctor “allowed the dynamic to totally change,” she noted, “so just when Clara was feeling more comfortable in the relationship, it has suddenly thrown something new up.”

Coleman made her Doctor Who debut in September 2012, as the mysterious Oswin in the Season 7 opener “Asylum of the Daleks,” then joined the show proper, as plucky Clara Oswald, in that year’s Christmas special.

Are you pleased that Coleman is continuing on? Do you prefer her dynamic with Capaldi or his predecessor Matt Smith?