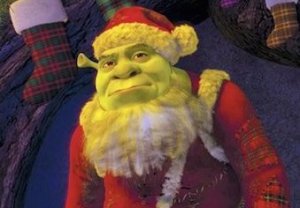 ABC’s one-two punch of Shrek the Halls and a Toy Story That Time Forgot encore topped Tuesday night, besting an uberpopular boy band along the way.

Shrek opened ABC’s slate with 5.3 million total viewers and a 1.2 demo rating, while Toy Story did 4.7 mil/1.2 — with the animated features tying for the nightly demo win. ABC’s Year in Review special drew 5.3 mil and a 1.1.

Over on NBC, One Direction’s first-ever Stateside TV special premiered to just 3.1 mil and a 0.7 (though it gave the Peacock a 7 percent boost among female teens). Holiday special encores from Michael Buble and Kelly Clarkson each did about 3.6 mil/0.7.