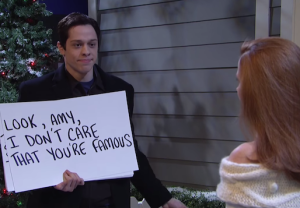 If you look for it, we’ve got a sneaky feeling that love actually is all around… and so are creeper pervs, if this unaired Saturday Night Live sketch is to be believed.

The bit, performed during the dress rehearsal for last Saturday’s Amy Adams-fronted episode but trimmed from the live broadcast, finds a man (cast member Pete Davidson) delivering a special holiday message to a woman (Adams) — a la Andrew Lincoln’s (The Walking Dead) declaration of devotion to Keira Knightley in the 2003 film Love Actually.

Of course, this is SNL, so the sweet gesture eventually devolves into a skeleton-dancing, ham-mentioning, #humblebragging mess.

Press PLAY on the video below to watch both actors try — and fail — to stay in character during the holiday skit.