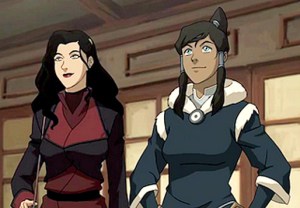 Legend of Korra fans can stop debating the titular heroine’s feelings for former-rival Asami; the Nickelodeon series’ creators have set the record straight about the final scene of Friday’s series finale.

“Our intention with the last scene was to make it as clear as possible that yes, Korra and Asami have romantic feelings for each other,” co-creator Michael Dante DiMartino writes in a Tumblr post. “The moment where they enter the spirit portal symbolizes their evolution from being friends to being a couple.”

Co-creator Bryan Konietzko has a bit more to say on the subject. Read his Tumblr statement in full below:

“You can celebrate it, embrace it, accept it, get over it, or whatever you feel the need to do, but there is no denying it. That is the official story. We received some wonderful press in the wake of the series finale at the end of last week, and just about every piece I read got it right: Korra and Asami fell in love. Were they friends? Yes, and they still are, but they also grew to have romantic feelings for each other.” 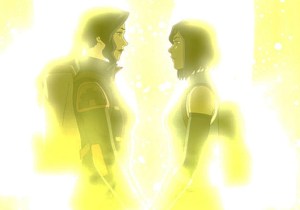 He continues, “There is the inevitable reaction, ‘Mike and Bryan just caved in to the fans.’ Well, which fans? There were plenty of Makorra shippers out there, so if we had gone back on our decision and gotten those characters back together, would that have meant we caved in to those fans instead? Either direction we went, there would inevitably be a faction that was elated and another that was devastated. Trust me, I remember Kataang vs. Zutara. But one of those directions is going to be the one that feels right to us, and Mike and I have always made both Avatar and Korra for us, first and foremost. We are lucky that so many other people around the world connect with these series as well. Tahno playing trombone–now that was us caving in to the fans!”

“But this particular decision wasn’t only done for us,” he adds. “We did it for all our queer friends, family, and colleagues. It is long overdue that our media (including children’s media) stops treating non-heterosexual people as nonexistent, or as something merely to be mocked. I’m only sorry it took us so long to have this kind of representation in one of our stories.”

Korra fans, were you satisfied with the series finale? Do you support DiMartino and Bryan’s justification of Korra’s final ‘ship? Drop a comment with your thoughts below.