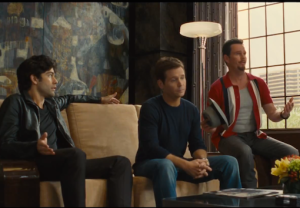 It’s been three years since Vince, E, Turtle and Drama last graced the small screen, but you wouldn’t know if from the first official trailer from the HBO series’ upcoming feature film.

Vince (Adrian Grenier) is still making movies of questionable value. Drama (Kevin Dillon) is still obsessing about the female form. Agent-extraordinaire-turned-studio-head Ari (Jeremy Piven) is still freaking out about everything. The guys are still finding themselves adrift in a sea of bikini-clad females.

In fact, if it weren’t for Turtle’s (Jerry Ferrara) dramatic weight loss, you might think that no time had passed at all.

Press PLAY on the video below to see what the guys are up to these days, then hit the comments: Will you plunk down cash for an Entourage ticket?