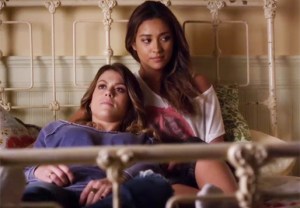 Pretty Little Liars‘ winter premiere has an icy chill in store for Emily and Paige’s relationship.

ABC Family on Sunday night released this first look at the Jan. 6 episode (8/7c), which finds the couple preparing to say goodbye, following the drama’s three-month time jump. Despite all the major milestones they’ll miss as a couple — prom and graduation, to name a few — Paige is certain her parents won’t budge on her big move.

“They want me someplace safe,” she tells Emily, proving that not all parents in Rosewood are oblivious to the danger these girls are facing.

Are you bummed about the seemingly inevitable end of Paily, or is a little space exactly what Emily and Paige need? Drop a comment with your thoughts below.