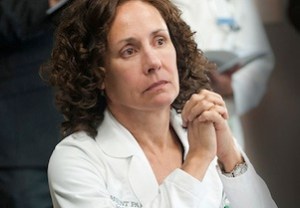 THE PERFORMANCE | From the very first episode of Getting On, Metcalf’s self-absorbed, perpetually beleaguered Dr. Jenna James has been a woman on the verge of a nervous breakdown (or perhaps even a psychotic break). In the show’s Season 2 finale — as her fledgling hospice program became the focus of a racketeering and anti-kickback proceeding in California Superior Court — Metcalf conveyed her character’s denial, panic, scheming and, ultimately, her acceptance of a probably grim fate, in a way that was both wickedly funny and undeniably sad.

As Dr. James first got wind of the scandal from the hopsital’s board, Metcalf physically shrank into her leather conference-room chair, nervously gulping water and trying not to let her fear show. You could see Jenna’s mind racing ahead as she hastily cobbled together excuses and reassurances about her program’s files: “They’re scattered in various locations, but I absolutely can gather those together, because really everything is actually fine!” she declared, terror percolating beneath each optimistic word.

Later, Metcalf took what might have been a nondescript moment — Dr. James leading her bewildered staff out of yet another daunting meeting with the hospital’s legal team — and made it darkly comic, as she sprint-walked back to the ward, desperate to outpace their questions but not wanting passersby to get the impression that anything unusual was happening. Behind the closed doors of her office, Metcalf gave us one last glimpse of Jenna in charge, barking out commands and assigning blame — until the hospital’s lawyers arrived in the hallway and left her whisper-screaming “we’re being thrown to the wolves!” while trying to convince her nurses to destroy incriminating files.

The scenes that followed — Jenna yanking out her hair extensions over a hospital sink and whispering “I’m not that person, I’m not Dr. Death”; Jenna being chased to the roof by Nurses Dawn and Didi for one last cathartic/resigned confrontation; and Jenna violently shaking back to life an elderly patient despite her “Do Not Resuscitate” instructions — served as additional reminders of Metcalf’s dramedy superpowers. Her HBO counterparts — Girls‘ Lena Dunham, Veep‘s Julia Louis-Dreyfus and even The Comeback‘s Lisa Kudrow may get more buzz and awards recognition, but Metcalf (along with costars Niecy Nash and Alex Borstein) is quietly doing work that’s every bit as stunning. Here’s hoping HBO recognizes that by ordering a Season 3 — and allows a wider audience to discover the brilliance of Getting On in the process. 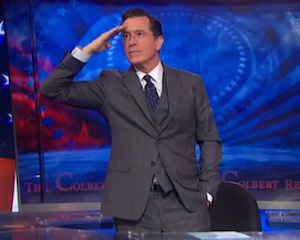 THE SHOW | The Colbert Report

THE PERFORMANCE | There’s a thin line between genius and insanity, and after Thursday’s final episode of The Colbert Report, it’s safe to say Colbert has one foot planted firmly on either side.

The now-former Comedy Central host had a heck of a task ahead of him this week: Not only did he have to bid farewell to the show that made him a household name, but he also had to lay to rest the very persona with which he’s charmed us all these years. Frankly, he accomplished both with flying colors.

From the death of Grimmy to the arrival of Santa Claus and a horned (I knew it!) Abraham Lincoln, Colbert sold every second of his twisted final outing with the same infectious, almost-childlike charisma he’s used to keep us hanging on his every word.

As for “Stephen Colbert,” the idea of him literally becoming immortal was a stroke of genius — kudos, writing staff! — one which no other TV newsman, real or otherwise, could pull off on his best day. In fact, it’s now hard to imagine him not circling the globe in Santa’s sleigh, stuffing truthiness into the stockings of every good little  girl and boy.

Additional kudos to Colbert for beginning his episode with a segment on Syria, thus tricking us into thinking his final half-hour was actually going to be about the news.

Oh, how he almost had us fooled.

HONORABLE MENTION | Time and again on Once Upon a Time, Robert Carlyle’s Rumplestiltskin chose power over all else, and that predilection cost him dearly, dearie, in the winter finale. After having his bid to crush Hook’s heart halted, the Dark One faced his darkest moment when his dagger-wielding wife banished the “beast” from Storybrooke. Carlyle crushed our hearts with his portrayal of a supreme sorcerer rendered inert, a magic addict who fell off the wagon one too many times. “Belle, please…. I’m afraid,” the all-powerful Rumple wept before being compelled across the town line, where he saw his true love vanish before him.

HONORABLE MENTION | For most of The Affair‘s freshman season, viewers have been kept in the dark about what really happened to Alison’s son, Gabriel, on the day he died. We knew he was very young. We knew he drowned. And we certainly knew the toll — physical, mental and emotional — that it had taken on Alison in the years since she lost her boy. But in Sunday’s episode, Ruth Wilson gave us a heartbreaking glimpse into her memory of that day. As Alison recounted the events leading to Gabriel’s death, she unraveled slowly, and then all at once, as she realized she may have been partially responsible for the loss. “Oh, God. Why did I put him to sleep?” she sobbed to her doctor, barely able to catch her breath. In the end, it was Wilson’s portrayal of a still-grieving mother that left us breathless.

HONORABLE MENTION | In “Orphans,” the winter finale of American Horror Story: Freak Show, Naomi Grossman did something more remarkable than even transform herself into Pepper: She changed our impression of the pinhead. As the carny mourned the passing of her mate, Salty (and later the nephew for whose murder she was framed), the actress sketched such a heartrending portrait of grief that it left no room to doubt the character’s capacity to not just understand love but to love, truly and deeply. The fact that Grossman was able to pull off this feat while uttering scarcely a word only makes her accomplishment that much wilder.