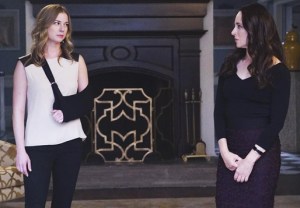 If you thought Daniel’s death would bring Emily and Victoria closer together, you don’t know Revenge. Like, at all.

New photos from the ABC drama’s winter premiere (Jan. 4, 10/9c) find the two most important women in Daniel’s life — for better or worse — shooting daggers at each other as they attempt to make sense of his senseless murder.

Stranger still, it looks like Victoria is going to weasel her way into Revenge‘s little gang of Scoobies; several photos show the grieving mother downing vino while Emily, Nolan and David get to the bottom of Malcolm Black’s next move.

Browse photos — 24, to be exact — from the winter premiere below, then drop a comment with your predictions: What’s going to happen in 2015?