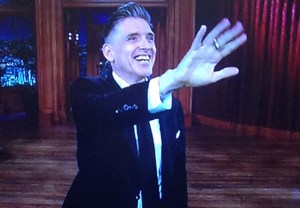 A massive musical number? Check. A casual, low-stakes chat with Jay Leno? Check. A surprise ending that will surely echo through the annals of television history? Oh my God, check.

Craig Ferguson spared no expense Friday during his final hour as the host of CBS’ Late Late Show, kicking things off with a star-studded (albeit pre-recorded) rendition of Dead Man Fall’s “Bang Your Drum.”

That was pretty much it for the evening’s big surprises, other than a phone call from “Bill Cosby,” who says he’s doing “pretty good,” in case you were wondering. The rest of the hour consisted of a chat between Ferguson and Leno, or as Ferguson describes them, “just two guys with nothing to do.” 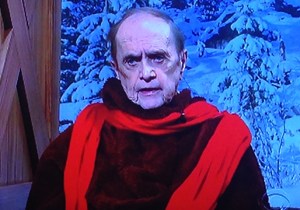 After nine years, Ferguson’s horse pal Secretariat finally removed its helmet to reveal who’s really been under there this whole time. Turns out, it’s been Bob Newhart all along — or was it?

In a follow-up nod to the series finale of Newhart, Ferguson then woke up in bed next to Drew Carey, who simply couldn’t believe the dream his bedside buddy just had. I mean, Ferguson as a late-night host? Carey as a skinny game-show host? That would be madness!

Wait, did I forget to mention that Ferguson and Carey were reprising their roles from The Drew Carey Show? That part’s pretty important. Also, if you were ever wondering what Drew Carey looks like in bed… you’re welcome: 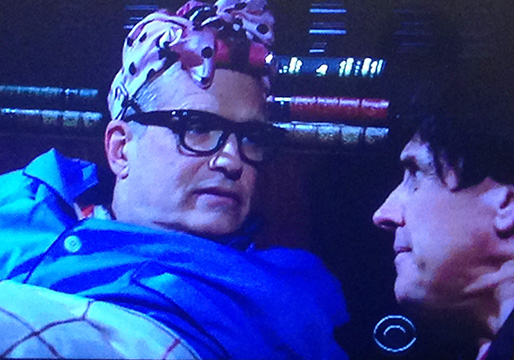 That final twist aside, Ferguson’s last hour was relatively low key — especially when compared to Stephen Colbert’s free-for-all the night before — but it was true to the kind of show he’s delivered since he took the reins from Craig Kilborn in 2005.

No fancy bells, no expensive whistles. Just a wacky Scottish man with a killer sense of humor, a skeletal sidekick and a horse pal — who’s actually (maybe) Bob Newhart.

And now, in the words of Geoff, “Grandma can finally get some sleep.”