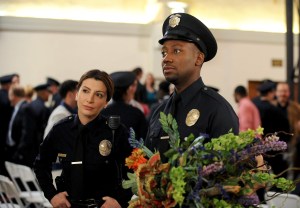 Things are about to get a little dicey — emphasis on “little” — in Winston’s ongoing journey toward becoming an LAPD officer on New Girl.

Fox’s Tuesday-night comedy has cast Saturday Night Live grad Nasim Pedrad as Aly, the new training officer/partner for Lamorne Morris’s goofball roommate, TVLine has learned exclusively. Aly’s diminutive stature will apparently be a cause of consternation for Nick and Coach, who are already freaking out about Winston’s recent graduation from the police academy and impending entry into the field.

Pedrad’s episode, titled “Shark,” will air Tuesday, Jan. 6 (9/8c) — and we’ve got first-look photos below. (The actress is a series regular on the network’s Sunday night comedy Mulaney, which airs its holiday episode this Sunday, Dec. 21 at 7/6c.)

TVLine’s exclusive gallery of images from the “Shark” episode also feature Zoe Lister Jones (Friends With Better Lives) kicking off a recurring role as Councilwoman Fawn Moscato, who begins using Schmidt as arm candy after the womanizing ad man begins courting her (at Jess’ request) in an effort to “stop the night construction outside the loft.”

Click through the gallery below for a first look, then share your thoughts on the Pedrad + New Girl combo down in the comments!