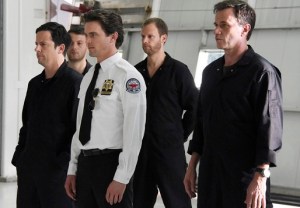 Thursday’s series finale of White Collar (USA Network, 9/8c) will have you glued to your seat – or at least that’s how star Tim DeKay recommends you watch the farewell hour.

“Do not walk away – and I know you wouldn’t anyway – but do not walk away until the final second of the episode,” the actor warns. “We’ve got some great twists and turns, some wonderful moments between everybody. And I think it fits on all the tones that have made White Collar what it is.”

In addition to a “great familial” sense, the hour includes a “wonderful” heist, and DeKay promises that “many questions people have had throughout the seasons … will be answered.”

But how will Agent Peter Burke and con-man extraordinaire Neal Caffrey say goodbye in the final moments?

“I think the writers did an incredible job creating somewhat of a cliffhanger, but also giving the audience a little bit to chew on,” star Matt Bomer reveals.

Reflecting on the show’s swan song, Bomer says, “I was really satisfied in some ways and, in some ways, I would have been interested to explore other avenues as well. There were still directions to go, but I think the way they wrapped it up was really well done in the sense that they didn’t try to tie everything up into a nice bow. They really left some things open-ended and left a lot up to the viewer’s imagination, which I always think is more potent than anything you could put down on a piece of paper.”

And it’s a series ender that both actors had some input on, pitching their own take on the conclusion of Neal and Peter’s journeys to creator Jeff Eastin. “We heard a lot of ideas being bandied about and we threw in our two cents, and it ended up becoming a soup that everybody had thrown a few ingredients into,” Bomer recounts. “So I don’t think Tim or I could take any personal or professional responsibility for it, but they were definitely open to our input.”

DeKay praises Eastin for “how well he listened, whether he listened to our rhythms through Peter and Neal, or listened to Tim and Matt.” Throughout the show’s run, the creator was “always open to that and not precious with his words.” 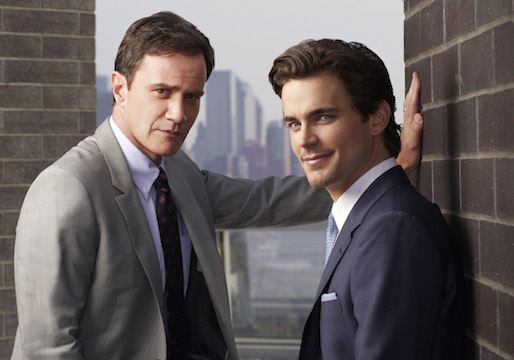 Given that the series finale doesn’t conclude with everything spelled out in a tidy manner, could a movie version – on the big screen or small – be a possibility?

“I don’t know,” DeKay replies. “I think in the past, I would have said, ‘No, I don’t see that being a possibility,’ but Veronica Mars kind of broke the mold with that. So I’m not going to say it would be impossible. I certainly would entertain that possibility, but right now, there aren’t any plans to have a movie.”

Bomer echoes the sentiment, noting any decision about a continuation is “way above my pay grade,” but if he was approached about such a project, “I would definitely want to do it just to get the chance to work with Tim and Willie [Garson] and Marsha [Thomason] and Sharif [Atkins] and Tiffani [Thiessen] again.”

Whether or not a follow-up comes to fruition, Bomer and DeKay have made a lasting mark with some of the best bromantic chemistry ever on TV and a genuine camaraderie than can be felt offscreen, too.

“I learned from Tim the kind of person I should be on set,” Bomer says. “I learned how to be a morning person, because I never was, thanks to this job. And Tim just is. I learned a tremendous amount about acting from him. Every day, I learned something different from him as an actor. But also, I learned just as much about how to handle yourself on set on a day-to-day basis.”

DeKay, in turn, was taken by his costar’s “unmatched” work ethic. “I’ve yet to see anybody who works harder than Matt,” he says. “He’s never satisfied, which none of us are as artists. There’s always one more take we want. And I’m glad that neither one of us ever allowed or accepted it to be satisfactory… The two of us never were [satisfied]. And also, I learned another kind of comedy from Matt, [who] is so specific and just brilliant and hilarious.”

White Collar fans, how would you like to see it all end? Drop a comment with your hopes below. 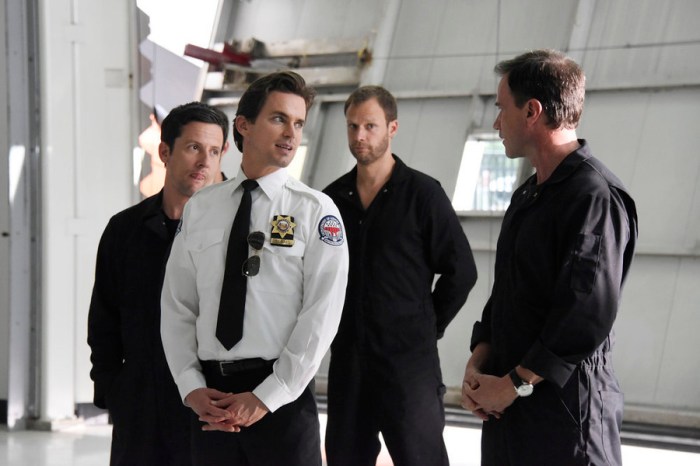