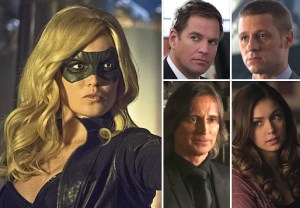 Who’s due for at least one NCIS encore? Will Arrow‘s Sara be back with a dramatic bang? Why is Gotham turning into a literal circus? Will Rumple‘s hostages be released? Read on for answers to those questions plus teases from other shows.

I missed seeing DiNozzo Sr. during NCIS‘ holiday episodes. Will he be back at all this season? –Diane
You have great timing, because when I asked showrunner Gary Glasberg about it the other day, he and the writers happened to be in the process of breaking the episode that brings Tony’s dad back for another encore, with an eye on a possible March airdate. “We’re actually planning to see Mr. Robert Wagner a couple of times this season,” he added.

Will Laura Allen’s NCIS: New Orleans character become a “love interest” for Agent Pride, now that she is widowed and he is divorced? I thought they had great chemistry and would love to see it develop. –Loretta
Let’s allow the widow to weep just a bit, yes? Exec producer Gary Glasberg allowed that such a match-up is “very feasible” though not on the drawing board, yet. “We’re in the process of figuring out our Back 9 right now,” he said, “but we’ve been so pleased with everybody we’ve had on the guest cast.”

Caity Lotz is back on Arrow in Episode 13, “Canaries.” Any idea of what can we expect? –Catarina
Showrunner Marc Guggenheim sums it up as “a really cool episode” in which Lotz appears as (of course) Sara and Peter Stormare (Prison Break) reprises his role as the villain Vertigo, which is a purposeful season-premiere callback. “It’s an episode where a lot of things that we’ve been doing and setting up during the season really sort of come together,” Guggenheim says of the intent to bring things “full circle.” He adds, “It’s not a ‘climactic’ kind of episode, but there’s a feeling of a big payoff by the end of it.”

Will Michael Rowe be returning as Arrow‘s Deadshot this season? –Joanne
When I spoke to Marc Guggenheim two weeks ago, there was no word yet on a possible encore for the Suicide Squad’s sharpshooter.

Any scoop on Nashville? —Suzanne
Will’s about to find out that being gay and a popular country music artist don’t have to be mutually exclusive. The ABC soap is casting the recurring role of Kevin Shay, an openly gay singer-songwriter who is one of the most successful in all of Nashville. Kevin is described as handsome, tough — a “man’s man.” Which we think is code for “Will’s new man.”

Really would love some Gotham spoilers on Leslie Thompkins and Jim Gordon, for when the show returns (on Jan. 5). Have any to share? –Mickey
Hmm, already I’ve had both EP Danny Cannon and new recurring player Morena Baccarin preview Leslie’s arrival/impact on Jim’s life. So instead I will share with you the latest casting calls – including John Grayson and Mary Lloyd, teenage circus performers who will figure into Episode 16 and hint at the origin of a certain Boy Wonder. Episode 17, meanwhile, will introduce two recurring characters: Dr. Dulmacher (aka another Dollmaker), this time conceived as a mad European scientist, and Reggie Payne, an old army buddy of Alfred’s who has gone a bit to seed.

Do you have any upcoming storyline info for Bones‘ Angela and Hodgins? –Pam
I can meet you halfway, Pam, with this pair of provocative sound bites from Michaela Conlin: “I hear that Angela’s going to go undercover this season, and that we’re going to find out her real name. I’m dying to know what it is!”

Are the fairies that got sucked into the hat on Once Upon a Time really gone, or is the show going to delve more into the hat’s powers through the rest of the season? –Kip
I for some reason assumed that Blue & Co. had been quietly released during all the winter finale drama, but I was, well, wrong. “They’re still stuck in the hat,” series cocreator Adam Horowitz assured me. “And that issue is dealt with early on in [Season] 4B,” premiering March 1.

Any chance you talked with David Amann about the future of Castle? He has to know whether or not they should start wrapping up the storylines, doesn’t he? –Mandy
I did my best to nudge Amann on that issue — namely, the need to sign both Nathan Fillion and Stana Katic for any possible Season 8 (and beyond) – but the truth is that such matters are hammered out by other Powers That Be. “It’s kind of not up to me or [series creator] Andrew [Marlowe] – it’s really between the studio and [the actors],” he deferred. “We don’t have any control over that process, but internally we hope this all gets resolved sooner rather than later, so we can move forward.”

I seem to recall reading on TVLine that Billy Burke was going to be making an appearance on Major Crimes. Would you happen to have any scoop on that? –Estee
Yes, Burke will appear in the final two episodes of the season (airing Jan. 12 and 19) when Phillip Stroh resurfaces with a possible ace up his sleeve. Now representing himself in court, “Stroh has a right, as the defendant and as his own counselor, to interview the state’s witnesses — and part of the deal that he is forcing them to make includes an interview with Rusty Beck” aka the lad he’s tried to snuff on multiple occasions, show boss James Duff previews. Seeing the two Closer characters at long last face off on Major Crimes “is pretty awesome,” Duff says. “You have two amazing actors there in the room.”

to us Hawaii Five-0 fans. Care to be good to us some more? –SCDL
You know how Melina Kanakaredes will be guest-starring in a Spring 2015 episode? Here’s the 411 on her role: The CSI: NY alum is playing Karen, a Special Agent with the ATF who is tracking a serial arsonist with whom, we come to find out, she has a personal vendetta.

Do you have anything on what’s next on Agents of S.H.I.E.L.D.? -Dee
As suggested by this piece of casting, Season 2B “absolutely” will delve into the mysterious Melinda May’s backstory, EP Maurissa Tancharoen assured me. “The long-awaited Cavalry story will be revealed.”

Any scoop on The 100‘s midseason finale? –Tara
There’s so much going on between the Grounders and the Ark survivors that one group — the kids at Mount Weather — don’t even make an appearance. Meanwhile, as Clarke tries to find a way to save Finn, flashbacks reveal why Raven owes him her life.

Kai is my new favourite character on The Vampire Diaries! Do you have any news on what’s coming up for him in 2015? — Maria
No good, Maria. No good is coming up for Kai. Executive producer Caroline Dries says the title for the Jan. 22 episode, “Woke Up With a Monster,” is directly related to Elena and Kai’s new situation. He’s not going to lift his cloaking spell until he gets exactly what he wants — and he wants to merge.

I don’t want to wait until January. What can you tell me about The Originals in 2015? — Katie
How’s this, Katie: Now that baby Hope is back in town, we’ll be learning more about her, including any powers she might already be developing. “We want to explore what makes the child of Klaus, a hybrid, and Hayley, a werewolf, completely different from any other child on this planet,” exec producer Michael Narducci says. “You’ll begin to see certain signs — subtle at first, then maybe not-so-subtle — in terms of how this baby is something completely unique.”

What’s the deal with Mindy Kaling’s mysterious black-and-white photos of her as a nurse and Joseph Gordon-Levitt and Chris Messina dancing? Can we expect a 1940s dream sequence episode of The Mindy Project? –Amy
I can hereby confirm that… no, those fun photos are from something unrelated to the Fox comedy. But as a consolation prize, I can scoop for you that the role of Danny’s younger half-sister Dani – who was briefly glimpsed last season — apparently is being recast. To that end, the show is seeking a 12- or 13-year-old to play a restless and surly Goth type.

be word on whether or not Covert Affairs has been renewed? –Tara
No word yet — on the eve of the season finale — but to hear one of the leads tell it, you better cross all your fingers and toes. “Where we end up at the end of this season, I hope it’s not the end,” Christopher Gorham shared with TVLine. “We don’t end the season on a cliffhanger in the traditional sense, so it could be the end. But it’s not the end that I think the audience would be happy with. And it’s certainly not how we would want to wrap up these characters’ stories.”