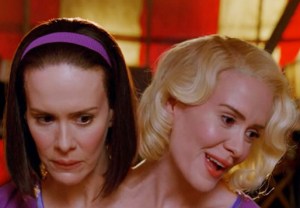 Wednesday’s American Horror Story: Freak Show midseason finale (FX, 10/9c) bids farewell to another member of the troupe, before saying hello to a familiar face from Season 2 — but the show’s dual-headed divas have far more pressing matters at hand.

With Jimmy behind bars for a crime he didn’t commit, Sarah Paulson‘s Dot is beside herself — like, more than she is on a normal day — and she’ll do anything to see him walk free.

“She loves him with too much purity, and he’s too pure a soul to her, to imagine anything horrible befalling him,” Paulson tells TVLine.

Below, Paulson expands her thoughts on Dot (and Bette’s) relationship with Jimmy, breaks down last week’s heartbreaking episode — for which TVLine named her Performer of the Week — and previews her role in Ryan Murphy’s new drama American Crime Story.

TVLINE | Before we get into what’s coming next, can we talk about your performance last week, specifically that scene between Dot and Bette?
Oh my God, I read that scene and just thought, “There’s no way I’m going to be able to this. It’s too hard!” It made me cry when I read it, and I thought, “Well, that’s a start.” But then there’s a certain amount of pressure when your first reaction is a big, emotional one. You sort of think, “Oh, God, that’s probably what they hope is going to happen for the audience,” and you start to feel a little bit of pressure, hoping you can pull it off. The truth is, that it was one of the more difficult scenes I’ve had to shoot.

TVLINE | Just hard emotionally, or was there a technical difficulty as well?
Well, one of the things I feel I need as an actor is another pair of eyes looking at me. I need to make eye contact with my fellow actor; that’s mostly what acting is, listening and responding in an honest way. I was having to look at nothing, which was very difficult. The other piece that was hard was, for those very close-up shots, I had to wear the animatronic head and switch sides depending on which girl I was playing. At one point, I turned to the director and said, “Can I take the head off? It’s hard for me. It looks dead!” I would have rather just used my imagination, but our director [Loni Peristere] was doing something that hadn’t been done before with the twin stuff — he was getting close enough on whomever was speaking that they were actually using the tip of the animatronic head’s nose in the shot so you could see it, and I was puppeting at the same time. The number of things going on in any given moment in those scenes … like, I’m tired. It’s harder than anything I’ve ever done, that’s for sure. 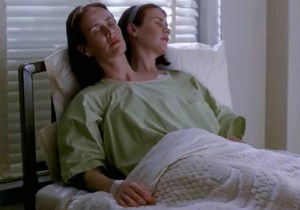 TVLINE | I’m glad Dot decided not to go through with the surgery, but I’m still worried about the girls. Should I be?
Well, it’s American Horror Story, and they don’t call it that for nothing. Something horrifying has to happen, so I can’t tell you that they’re safe. Of course, I can’t really tell you anything for fear that my own life will be cut short.

TVLINE | It sounds like you’re living your own little American Horror Story.
[Laughs] Yes, exactly. I feel like everybody’s so desperate to know what’s happening next, which I love, because it means they’re passionate — but I also know that if I said what’s going to happen, people would be really bummed out that they found out early.

TVLINE | Well, people are dropping like flies, as always. Have any of this season’s deaths hit you harder than others?
You know, I think I’ve become kind of inured to that. By the time [the deaths are] on film, we’re so far beyond them. I’m kind of like, “Oh, well. See ya later, Ethel! See ya later, Gloria! Bye-bye!” We’ve just got so much other crap we’re dealing with, there’s no way for me to mourn them for too long. But they all make me sad, especially this season. Last year, Cordelia was a little bit on the outside of the story, especially with the younger girls being the main focus. This season, I feel very much a part of the family of the show, the show within the show, and those are the people kicking the bucket.

TVLINE | The girls seem especially close with Jimmy. How would you explain their relationship?
Jimmy, as played by Evan Peters, is just the heart and soul of the show. The one thing he has, and has always had from the beginning, is an enormous heart. He’s a real beacon of light for them, and Dot is completely in love with him. But he’s worthy of all that. He’s a real man. He accepted them right away for who they are, and they had no frame of reference for that. They feel very connected to him because he’s always been so good to them. He’s always looked out for them.

TVLINE | So how might they react if something bad were to happen to him, say, in jail?
Say it ain’t so! Bette would survive, but if anything happened to Jimmy, I don’t know if Dot would make it. She loves him with too much purity, and he’s too pure a soul to her, to imagine anything horrible befalling him. But like I said, this is American Horror Story, so no one’s safe. 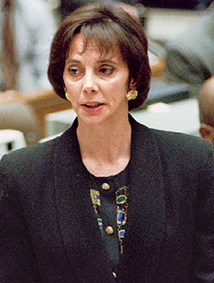 TVLINE | While I have you, let’s talk about your role as Marcia Clark in American Crime Story. How are you preparing? Did you watch the trials back in the day?
I definitely watched the trials, but I’d just graduated from high school, so I’m sure I didn’t watch with the care I would have watched with today. I remember being incredibly fascinated by Marcia Clark. I was taken with her strength, and I remember thinking, “God, this woman in a real force!” I certainly never thought I’d be playing her all these years later. … Starting in the new year, I’ll become a voracious reader of all things Marcia Clark. There’s also so much footage for me to pull from, so I’ll be binging on things people haven’t been binging on in years, and I probably won’t leave my house for a couple months. I’ll become a Marcia Clark-obsessed recluse, and no one will want to invite me to dinner because all I’ll talk about is Marcia Clark.

TVLINE | Ryan Murphy is famous for writing killer twists. Will Crime Story be less surprising, since it’s a true story?
The story is what the story is; this is really more of a behind-the-scenes look at what happened between the defense and prosecution. We know the outcome and the key players, but there’s a lot of things that happened that a lot of people don’t know about. I know Ryan Murphy’s smart enough to know you don’t need to put a twist on something you have to witness to believe. Nobody can make anything up that’s more interesting, or has more twists, than a story like this.

Freak Show fans, who do you predict will be the next to go? Drop a comment with your thoughts and theories below.