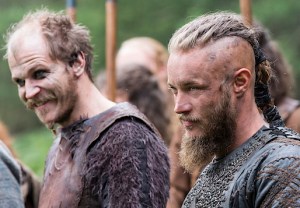 The 10-episode third season of History’s epic drama will follow the farmer-turned-leader as he navigates his newfound power.

The upcoming installments also will introduce a bunch of new characters, including Kalf, Lagertha’s good-looking second-in-command (played by Ben Robson, Dracula: The Dark Prince); Harbard, a wanderer (played by Kevin Durand, Lost/The Strain) who shows up in Kattagat while most of the town’s men are away raiding; Emperor Charles of France, a fan of the Vikings (played by Lothaire Bluteau, The Tudors); and Princess Gisla, Charles’ beautiful and courageous daughter (played by French actress Morgane Polanski).

Vikings was renewed for a third season in March, four episodes into its sophomore run.